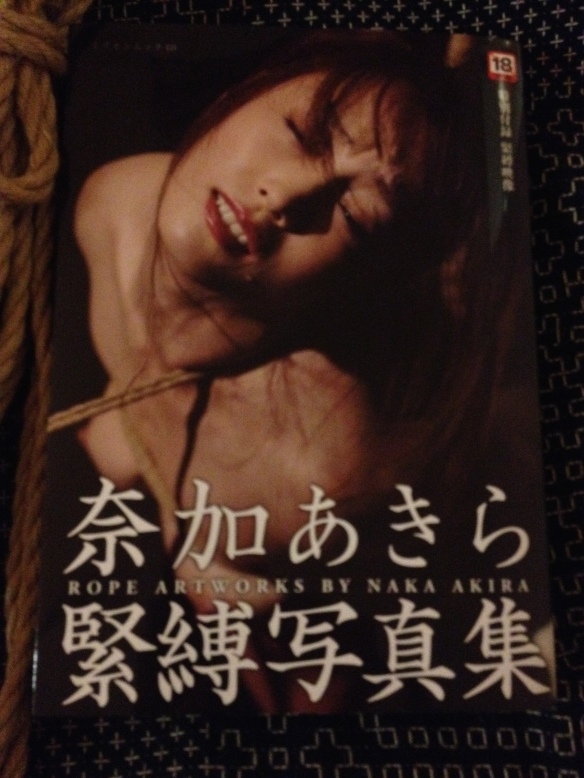 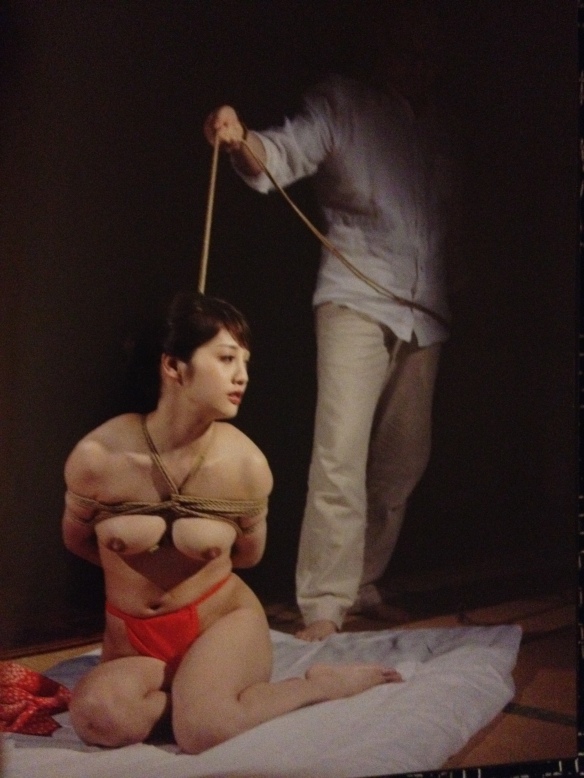 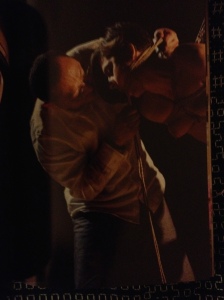 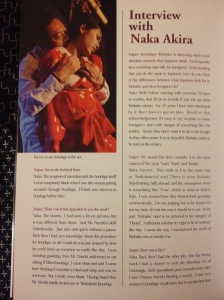 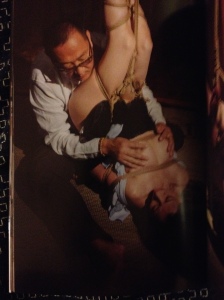 This is a rich book. For a change, the photos of Naka’s rope work is not by Sugiura Norio (the only one except Nureki Chimuo that Naka calls ”sensei”), but by Erisa Sato. She has stated that she is interested in a ”relational” aspect of kinbaku – this is perhaps one of the reasons that the book contains quite a few images where not only the tied person is shown, but also the person tying. The bakushi emerges from the shadows… As friends of this blog might have noticed, whenever I have the chance I tend to choose such images wherever I can, but in the publications they are relatively rare.

In addition to the photos of sessions with a number of interesting models (including Gorgone and Iroha Shizuki), the book comes with a DVD. And to top that off, it also has an interview with Naka-san translated into quite readable English, with statements like the following: ”They say that a binding person is sadistic and a bound person is masochistic. When I bind someone however, I put myself into my partner’s position and care about their feeling. I have a feeling that I am not sadistic by nature. I think I am rather masochistic. In fact, I even think that is why I can do that way.”

PS For anyone who wants to read some other interviews with Naka San, there is a recent one in Spanish from his visit to Madrid here (including a short video):

Also, there is a somewhat longer interview in Su Zume’s new book Pink Kinky: Japan’s Sex Underground (Kingyo, 2014, p. 109–119) – that also has smaller interviews with Kinoko (not quite up-to-date), Hiromi Saotome, and many others. Admittedly somewhat superficial, but gives a nice sneek peek into the night life of Tokyo.

This post is slightly off topic, as only a few of the images in these books involve rope. Most often the focus is on a kind of ”dog-play” with a dynamic of dominance and submission. But the powerful images of Asaji Muroi (born 1946) have over the decades been featured in publications like Kitan Club and S&M Sniper, and Kinbiken even included a video devoted to dog-play in their film-series.

The very large format book ”Les Bien Aimees d’Asaji Muroi” has an introduction written by Agnes Giard (printed in French as well as in English), and is printed on very thick, good quality paper. It was printed by Timeless in a limited edition of 300 copies. Not printed by a Japanese publisher, it is also one of few exeptions to be included on this blog anyway.

The smaller, blueish book is called 僕のイメージ画集, published by the SM Museum in 1993, as is the A4-size book 首輪をつけたビーナス (Venus wears a collar), from 1994.

The smallest book, 哀犬倶楽部 / SM 露出プレイ, is beautifully packaged in a slipcase with the English title ”Life with Woman Dog”. It is edited by Hideaki Nakada, and the photographer and bakushi Yasuji Watanabe (already know to readers of this blog), and comes with a postcard and a small poster in black and white print. Numbered edition – this is number 278 of a limited edition 1000. It is also the only one of the books that actually has an ISBN: 4-8130-0503-9. Publisher: Taiyo Tosho, 2004. 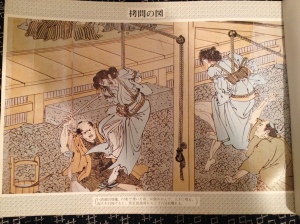 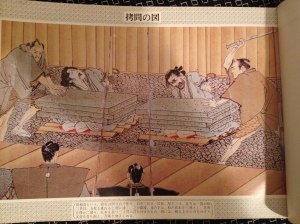 This is a 1972 reprint of the classic book from 1893. It contains more than 50 large color images printed on glossy papper, in addition to 60 pages of text and sketches in black and white. In the colour-part, the first section shows crimes supposedly typical for the Tokugawa period (1603-1867). This is followed by scenes of arrest by samurai officials, often involving rope and hojo-jutsu patterns. The next section, which is the largest one, shows suspected criminals interrogated, tortured, punished, executed. Tortures are of four basic kinds: flogging, ishidaki (”pressing with stones”), ebi-zeme (”prawn-torture”) and tsuri-zeme (torture by suspension).

In the introduction to his excellent Punishment and Power in the Making of Modern Japan, Daniel V. Botsman describes how the series of images in this book ends with pictures of the more ”modern” Meji-era prisons and courts of justice. He also notes that the original edition had image captions as well as a preface in English. It goes something like this:

”Since a revolution of the first year of Meidi (1863) Japan had changed all the conditions of state, and is now at the wonderful Progress of civilization, so that it is administrated by the constitutional government. Long before the revolution Japan was governed by a Despotism of shoguns or Taikuns. The punishments of this time were very creul, so as indicated by this picturebook. No longer Japanese almost memory these creuleties, and therefore this has now become one of japanese history. The book is divided into three parts, each containing a blief explanation : 1. Commiting the crims, 2 old Punishments by shoguns, which are the plincipal subject of this work, 3 Justices of our time: On compariny these facts you will understand how Japan is presently changing and civilizating its state.”

Botsman expertly analyses the different political stakes involved in this publication, as a new era seeks legitimacy (also internationally) through its projection of the past. This is a topic to vast for my blog, but anyone interested should have a look at Botsmans book – I think there is a lot to learn also for a reflection on the political aspects of the imaginary involved in images of kinbaku, in Japan as well as abroad.

In my 1972 edition, I was puzzled not to find any English preface or captions. And at a closer scrutiny, also the last five images depicting modern times are missing. I have not been able to figure out why just yet. Fortunately, the original book is scanned in its entirety and presented here – even with english translation: http://www.meiji.ac.jp/museum/criminal/keijizufu/contents.html?mt=nm&hl=en

(The pictures lacking in my edition are numbers 56–60.)