This small book I found quite entertaining. It was published in a series of ”action books” in 1981. The author goes out to visit a number of SM-related clubs and events. Each of the different venues and organizers gets a few pages of description, the address and phone number is given – and lots photos (some featuring the author himself involved in SM play).

Represented are for example the GSG Project, SAMM, RA-project etc – in other words groups and sites for an underground SM culture with a keen interest in ”performance” and aspects of an avantgarde aesthetics during the early 1980s. As is made clear for example in this interview, it is also a context from which which Akechi Denki emerges as a performer.

Lots of names could be mentioned, but here let me point to the following three, all involved with GSG Planning: Sakurada Denjiro, Shuji Onizawa and Osada Eikichi.

In an interview with Ugo of SMpedia in 2014 (whom I understand has done a lot of reasearch on this), Denjiro Sakurada said that Akechi Denki’s name took [伝], the first part of the name ”Denki” [伝鬼] from Denjiro [伝次郎] and the second part [鬼] from Onizawa Shuji [鬼沢修二]. Osada Eikichi is a central figure on the performance-scene in these years, as can be seen on some of the photos in this publication (see the last series of five pictures in black and white below).

I like to think it offers a kind of snapshot of a period in time, with a distinct flavour.

(and, of course, much much more on the same website) 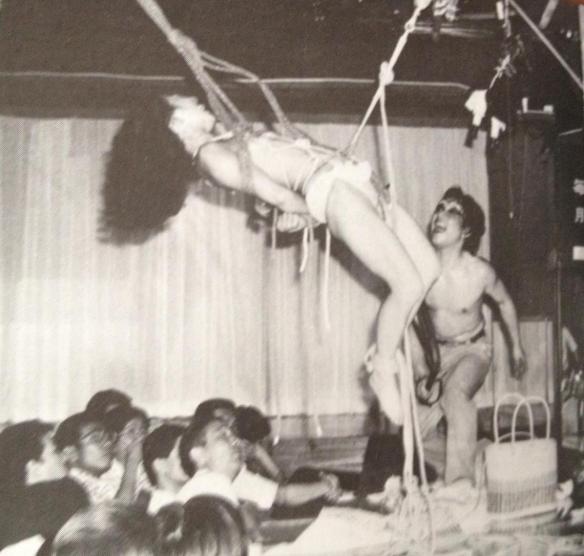